There are two major manufacturers of awnings used on RVs:

Even though there are only these four basic types, it can still get a bit confusing, mainly because neither manufacturer clearly or easily identifies the model number for the customer. They do put a "nameplate" which includes the model number on the surface of the roller tube, usually several inches in from the forward end of the roller tube. You'll have to extend the awning completely to see it. Even then, you might have to do some interpretation, as I know that some manufacturers use the same roller assembly with both power and manual awnings. I don't know whether or not the model number on the nameplate accurately reflects the actual use on a specific RV. 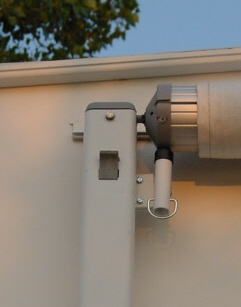 This (left) is a Model 8500. It's probably the most common awning on RVs, at least those made before 2010 or thereabouts. (Since then, many RVs come with electrically-operated awnings.) 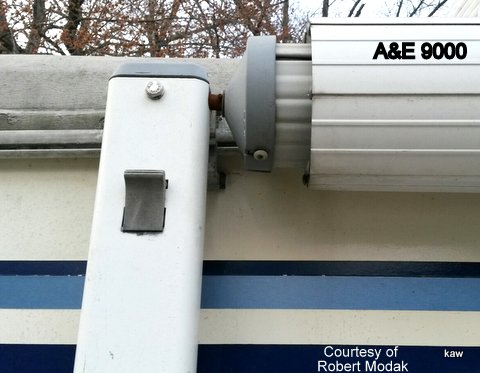 The Model 9000 (right picture) is mechanically the same, but has an aluminum sheath which covers the fabric when rolled up.

These picture show the "old" rectangular arms. Models with these arms use the Model A RV Awning Travel Lock.

Beginning in 2009, customers started ordering locks for Dometic (A&E) 8500/9000 awnings which have what Dometic calls "Universal Plus" arms. These arms are of cast or extruded aluminum and are "U" shaped. These arms are picutured below, with the Sunchaser. If you have these arms, Model A is still the correct RV Awning Travel Lock.

For clarification, please see note below.

The Dometic (A&E) Sunchaser was fairly easy to identify because of its U-shaped support arms. But now similar arms are supplied on A&E 8500/9000 awnings. The left picture shows the top of the left arm. Because it is much easier to identify it in the picture to the right, I've included that, too. It shows the lower end of the left support arm. Actually, this is a picture of a Universal Plus arm with the rain dump feature, a feature which is supplied only on the 8500/9000.

Note:
It's not always easy to tell the difference between an 8500/9000 and a Sunchaser. Here's the key to selecting the proper RV Awning Travel Lock: If the rafter (that's the member which attaches to your coach at the top; the arm attaches at the bottom) is rectangular in cross section, order a Model A. (The Model A attaches to the bottom surface of the rafter.)

If the rafter is "U" shaped, order a Model B with TSWP adapter and a spacer. The "U" shaped rafter has no lower, or bottom, surface, so the RV Awning Travel Lock must be mounted to the arm. That requires a Model B. 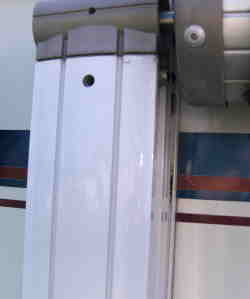 The A&E OneStep (left) was made for a short period some years ago. You might have one!

It was replaced by the A&E TwoStep. I don't have a picture of the TwoStep but it is the same physically as the Dometic WeatherPro, shown several pictures below.

Both the OneStep and the TwoStep use a Model B with TSWP Adapter RV Awning Travel Lock. 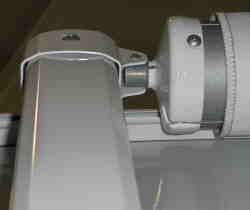 Here's a Carefree manually-operated awning. Some are labeled "Fiesta" on the support arm, some are not. I don't know that there is any mechanical difference.

The Model A RV Awning Travel Lock fits all except one Carefree manually-operated awnings. It does not fit the Carefree Pioneer Manual Crank Awning. In fact, Carefree says it will not unfurl! 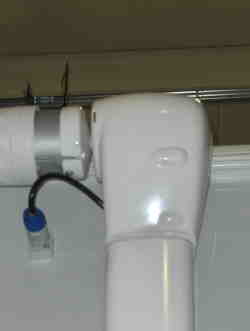 Travel'r is a new model from Carefree; here's a picture of it. Many new Montanas come with this awning installed.

In the past, Carefree's website for this model stated, ". . . you can rest assured the awning won't billow while your(sic) traveling."

Now their website claims, ". . . peace-of-mind that the awning won't billow."

If you follow popular RV forums on the Internet, you know that these awnings have come unfurled. Until relatively recently, there has not been an RV Awning Travel Lock which solved this problem.

Fortunately, late in 2016 RV Awning Travel Locks with adapters which fit these awnings became available. For these, please contact the manufacturer, Loess Hills Innovations, at goldenwgf@aol.com or (712) 310-7188 for information, prices, and to order.

Recently (2015?) Lippert Components began offering patio awings for RVs. For an RV Awning Travel Lock and adapter which helps protect these awnings from unfurling, please contact the manufacturer, Loess Hills Innovations, at goldenwgf@aol.com or (712) 310-7188 for information, prices, and to order.

The Dometic (A&E) WeatherPro Power Awning, right, has been manufactured for several years. It has been installed on many RVs, especially motorhomes.

The RV Awning Travel Lock Model B with Adapter TSWP is the proper lock for this awning.

Note: RV Awning Travel Locks are supplied in white only. The one shown installed here has been painted by the customer to complement the colors of the WeatherPro awning and the coach itself. This photo supplied by customer Clay F. Thank you, Clay! 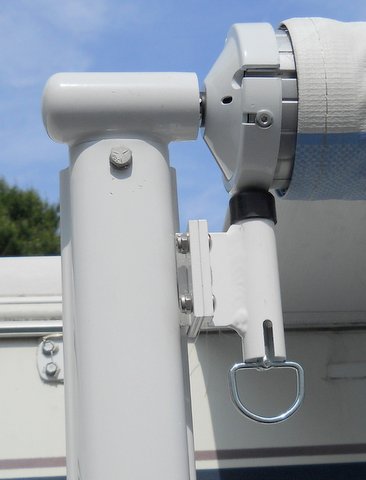 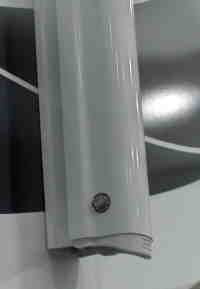 Dometic (formerly A&E) also offers a more affordable electrically operated awning, originally called simply A&E Power Awning. Now they call it the Dometic 9100 Power Awning. There's a picture of it at the left. The picture at the right shows the lower end of the support arm.

Customer Jack Graves supplied the picture of the Dometic 9100 Power Awning and are used here with his permission.

To order, please return to the Home page, then scroll down to just below the selection chart toward the bottom of the page.

If you have questions about the RV Awning Travel Lock, please contact me.
kaw@syntheticsaves.com

I am looking forward to receiving the awning lock. It will really put my mind at ease during travel. Thank you very much to take the time to both respond to my email and in speaking with me on the phone.